Help us find homes for Sheldon and Morton

Please see the bios below written by their foster mom!

When Sheldon first arrived he was tired from the travels so after he ate and figured out his new space, we cuddled him while he was on his back signing the soft kitty song from Big Bang Theory and he was out for the night. He was then named Sheldon from that point on! This little guy holds the title for being the current biggest kitten, and appears like he’s the tallest as well. Sheldon loves the humans and always rushes to door to greet us. He likes to eat his food fast, then help everyone else finish theirs. You can find him easily as he has traditional orange tabby stripes – but he has tall white boots on. He loves to play with his brothers and sisters, balls, and of course a good box is always exciting! Newest fascination- human feet! Wear socks around him for now! 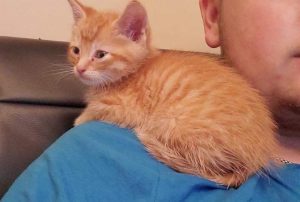 Morton was named from my daughter again, this time from a dream of an all orange/ginger cat who became a support kitty. He has a small spot of white on his belly side. Morton is fearless. He came out of the crate running on the first night, he isn’t afraid of much at all. He’s a cuddle bug and loves to eat. He will often pick cuddling with a human, rather than his fur family. He loves his food, and naps. Every time he hears humans coming, he runs for the door as the greeter. He also tries to sneak out and explore the rest of the house. He can hold his own with our dogs, but he’s too small to be amalgamated into the house just yet, as my one dog is a little too rough for his small size. He is very interested in the calm dog though! He is a very well rounded kitten.